Springboro versus Centerville predictions for tonight... 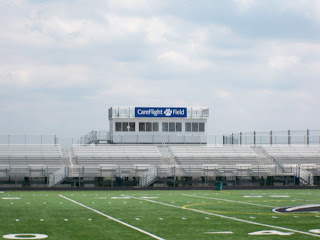 We like to scour the net and find different opinions and articles found online about Springboro Panthers.  We like to see what others are saying about our teams in the Miami Valley.  Here are some predictions we have found online for tonight's HUGE game versus Centerville Elks.

--The ELKS beat Springboro 55-17 last season at Springboro's FlightCare Field. So I don't hold out much hope that 'Boro can come into Centerville Stadium and pose much of a threat to the ELKS this season. Plus, I think the ELKS are at least as good as they were last season, seeing how the ELKS played Elder a bit closer this season. Elder has another quality squad this season, and this seasons opening game was at Elders "Pit."

--Springboro beat Mason by 3 points last Friday. But from what I've read on Yappi, Mason lost most of their starters from last season, including their whole offensive line. So it stands to reason that Mason doesn't have as good a team this season, as the did last season (when they beat Springboro by 10). I know it's early in the season and harder to form opinions about how good a team's going to be. But it seems to me that Springboro at best is only slightly better now, than they were at this point last season. ~~ The ELKS on the other hand, seem to be at least on par now as they were at this time last season. So I see pretty much see the same result in this seasons game, as was in last seasons game. Quite possibly another 55-17 rout by the ELKS.

--I was at the Mason/Elder scrimmage and the Mason/Springboro game. The scrimmage between Mason/Elder was extremely tight, I think fans on both sides would have loved to see that in a real game setting. That scrimmage they also had a Junior QB starting that day. That junior QB happened to transfer from Springboro. Well OHSAA ruled that QB ineligible Thursday before the game, I don't know if there was any prior knowledge to it or not, but that sounds fishy that it would happen that late in the season. And maybe Springboro was holding on to information to that last moment also.
All that being said, this Mason team could be good. They are going to be extremely young. They play good defense, but in the end they had to put in a sophomore QB, who has been taking reps with JV the whole time. I believe Centerville will beat Springboro but I haven't seen much of Centerville this year. Springboro has a quick QB and a steady RB (lots of zone reads and play action).

No one will know till they put on the helmets tonight!!  But these were a few thoughts we found online.  What do you think?  Comment below and let show your Panther support!!


The Springboro Voice
Springboro, Ohio 45066
Operated by TheVoiceofMiamiValley.com
Serving CarlisleDaily.com, TheFranklinVoice.com, and TheSpringboroVoice.com The articles and posts on this site do not necessarily reflect the opinions or views of the management and owner of The Voice of Miami Valley. Letters and Guests are welcome to submit to The Voice and all other sites managed by The Voice of Miami Valley. All submissions must be published with signatures. No unsigned submissions will be published. Submissions should be emailed to owner@thevoiceofmiamivalley.com Thank you for your readership!
Posted by Dominic Gross at 6:56 AM