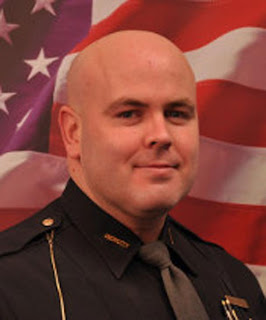 At approximately 2 a.m. this morning, May 10, a deputy from the Warren County's Sheriff's Department was struck and killed as he deployed stop sticks in an attempt to end a high speed pursuit that began 20 minutes earlier in Franklin.The fatal accident took place on Utica Road, near State Route 42, in Turtlecreek Township and led to a two hour delay for Lebanon City and St. Francis schools. The suspect fled the scene on foot and was found several hours later near the intersection of Drake Road and State Route 122.


Sergeant Brian Dulle joined the sheriff's department on January 19, 1999 and was promoted to sergeant in November of 2005. He was struck and killed instantly while laying stop sticks to end the high speed pursuit of a 2001 Cadillac. The chase began in Franklin and proceeded through Springboro on State Route 73 and into Waynesville. The suspect turned south on State Route 42 and proceeded at a high rate of speed traveling southbound in the northbound lanes. One cruiser was struck and forced from the road and another cruiser was nearly hit. Those officers sustained no injuries.


Sergeant Dulle was a graduate of Edgewood High School and Miami University and served in the United States Army. He is survived by his wife Abbie and 3 children, ages 4, 7 and 10. He was the first deputy killed in the line of duty in Warren County. Sheriff Larry Sims described his fallen officer as a hard worker and practical joker.


The investigations into the high speed chase and resulting death of Sergeant Dulle are ongoing by the Ohio State Highway Patrol. The suspect is in custody, but his name and details of the chase are not being released at this time.
The Springboro Voice
Springboro, Ohio 45066
Operated by TheVoiceofMiamiValley.com
Serving CarlisleDaily.com, TheFranklinVoice.com, and TheSpringboroVoice.com The articles and posts on this site do not necessarily reflect the opinions or views of the management and owner of The Voice of Miami Valley. Letters and Guests are welcome to submit to The Voice and all other sites managed by The Voice of Miami Valley. All submissions must be published with signatures. No unsigned submissions will be published. Submissions should be emailed to owner@thevoiceofmiamivalley.com Thank you for your readership!
Posted by Dominic Gross at 6:56 AM