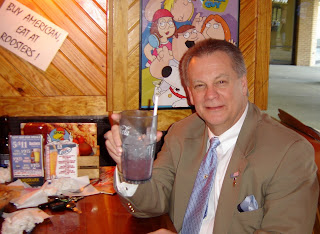 On Tuesday evening April 26, Roosters restaurant held a fund raiser for the Springboro Community Assistance Center that Wendy Ford started 4 years ago. Wendy, a social worker for Springboro Community Schools was tempted in 2007 by Superintendent David Baker to start the organization when he showed up with several bags of groceries one morning. She went to work immediately. Wendy’s maiden name was Chmiel and is city councilman Jim Chmiels niece. Wendy is Jim’s brother Barry and his wife Pat’s daughter. Under Wendy’s direction the SCAC has grown from taking care of 12 families in 2007 to over 2,900 fed, 1,400 of them under age 18, 740 families, 6600 lbs of perishable food and 10,000 items distributed each month in 2010. Those attending Tuesday’s event were encouraged to bring 4 canned goods for SCAC and in turn would receive a $2 off coupon for immediate or future use. Several gifts were auctioned off from $55 to over $100 with all money going to SCAC and then there were door prizes galore including $5 off dinner coupons, shirts, hats, and stuff for guys to hang on the walls of their man cave. Dancing, and karaoke added to the fun for the evening that raised over $1,000 in cash and lotsa canned goods. Mayor Agenbroad made a personal  cash donation of a substantial amount to help Wendy and the center which he has done every year since it’s inception. Above he hosted a glass of pink lemonade to salute the lady of the month Wendy Ford for her charitable work in our community. A special thank you to Roosters, Bobby Jo, the general manager and her staff for hosting the event and their kindness to support those less fortunate.
Coming up next week Springboro High School presents “Thoroughly Modern Millie” Thursday, Friday and Saturday at 8:00 P.M. and again on Sunday at 3:00 P.M. Tickets are $12 each and can be held by calling 748-3950 x 4659. Don’t miss this exciting and fun play by our local high school performers. They tell me that Millie ROCKS!
Next Friday night is also the fund raiser for Springboro’s Country Star Carlie Short at the Springboro Eagles from 6 p.m. till 11 p.m. Tickets are $20 for adults and $10 for youth under 20. It’s a fish fry with all the trimmings, beer, soda drinks, water and more. Carlie will sing her song about SR 73 here in Springboro along with a few others she’s written. Come be a part of history in the making as Carlie departs for Nashville in June to perform for the summer. This little country gal (Class of 2011 at Springboro High School) is going places. Don’t miss this event.
Last Thursday morning the Springboro Optimist Club held their second of their twice monthly breakfast meetings that are open to the public at Heather’s Coffee & Café in the barn. Guest speakers were Counselor/Pastor Terry Carlisle, Director of the Springboro Chamber of Commerce, Carol Hughes and Mrs. Ohio 2009, Stephanie Gooden. The presentation topic was “Domestic Violence & Sexual Predators”.  You could’ve heard a pin drop, as we all sat on the edge of our seats not wanting to believe what we were hearing from Stephanie. Growing up in Texas, she attended a church sponsored elementary school where the head master abused little girls from 4 to 11 years of age by gaining the confidence of their parents and controlling the little girls. They were told if they said anything to their parents, their parents would lose their jobs and they “the children” would have to be placed in other homes. Terry and Carol spoke to the charge that sexual predators look for positions in churches and schools and that’s where they’re most dominant and where we have to be most cautious. Stephanie’s message was very frightening in this day and age because the authorities were never called. The church just moved the head master to another school in another state where he continued his actions abusing over a hundred children before authorities were notified. When caught he took his life immediately. Be careful, really careful with your young children and grand children today. It was a great presentation by all three and our hearts went out to Stephanie for what she had to endure during those difficult early years of life.
I leave you with:
“Let go of the past and go for the future. Go confidently in the direction of your dreams. Live the life you imagined.”
- Henry David Thoreau

Posted by Dominic Gross at 8:48 AM