Her last call was from a new cell phone...

I do not take much interest in emails that are forwarded to me but this caught my attention. For the most part cell phones are ultimately in possession of most drivers today. I have talked on my cell phone just fine without impairing my driving and there are times that it has. We are all guilty of trying to text, dial, and talk on a phone while driving. I believe all can admit that it has even taken our attention from the road at some point in time. This email hits home due to the fact I have someone I knew fairly well that was killed while riding his Harley by a driver apparently using her phone, as well. Read for what it is worth to you.

Her last call was from a new cell phone...

Do you see the motorcycle? 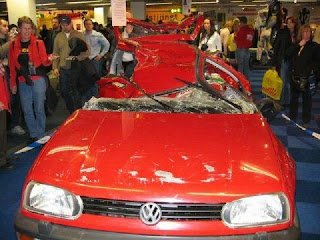 Now do you see it? 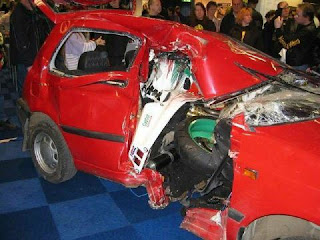 The Honda crotch rocket rider was traveling at approximately
85 mph. The VW driver was talking on a cell phone when she
pulled out from a side street, apparently not seeing the
motorcycle. The riders reaction time was not sufficient
enough to avoid this accident.
The car had two passengers
and the bike rider was found INSIDE the car with them.
The Volkswagen actually flipped over from the force of impact
and landed 20 feet from where the collision took place.

All three involved (two in the car and the bike rider) were
killed instantly. This graphic demonstration was placed at
the Motorcycle Fair by the Police and Road Safety Department..
Pass this on to car drivers or soon to be
new drivers, or new motorcycle owners...

A picture is worth a thousand words.

Posted by The Voice of Springboro at 2:37 PM