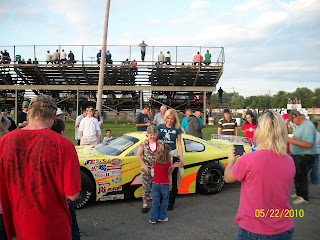 It was a great weekend again!  However, it was a disappointment that Kil-Kare was rained out Friday night.  It was to be the bus races at Kil-Kare which are rescheduled for this weekend and we really wanted to try the new gas from Estes Oil in Franklin.


Saturday we went to Pisanello’s for pizza and headed to the shop around 1 p.m.   We got to Motorcar Auto Body just in time to help get the car loaded.  Gary and some of the guys had already been working on the car since 9 a.m. We are trying different racing fuels from Estes Oil.  We are also trying different staggers to try to get the Koehlke GreenPro Landscaping #4 faster.   We got a new 12 volt battery this week with 1300 cranking amps. Ok I’m not sure what that means either but it more then the diesel truck we use to pull the trailer so starting the car should be easier.


At Columbus, we unloaded the Rebel 105.9 car and went out for the first practice.  It had been raining and the track was still green.  They also have a weep hold in the track in turn four where ground water can seep onto the track.  They were trying to get it dried up.  Our second practice, we found that we needed to make some chassis adjustments because our tire temp was off.  By the third practice, we were right in line with most of the other cars.  Just my luck, we drew 4 and was to be the first to qualify.  I qualified at a 13.44 which was third fastest. In the dash race on was on the outside pole and as I described earlier there was a wet spot on the track on the outside of turn four.  I was unable to get on the gas as hard as I like to come to the green flag.  I ended up finishing the dash race in third.


It was privilege to go over to the fan section to sign autographs before the intermission.  It was exciting to meet all my supports and answer questions.  I had a great time greeting each one of them. The look on the girl face as she skipped off says it all.


In the feature, I started in the outside of row four in eighth In the Green Pro landscaping Koehlke components NASCAR Whelen LM .  Just like playing checkers, you need to know what the other players could do.  The guy leading my row was not great on the outside and was having problems with his car earlier.  As I quested it I got pushed back to the tenth position it should have been ninth but a guy came in to my line and I choose to let him in because it was early in the race, I did leave the door open a little so it was somewhat my faulty.  Unfortunately he hit me and we going to have to do some bodywork and paint. ( no Mirrors or radios in these cars) I had to wait for the right time to start passing.  The opportunity to start passing came late in the race.   I quickly moved up to the fifth position in just a few laps to go.


We have been doing a poll on Facebook with our new t-shirt designs.  We hope to have a few of them available soon for purchase.  We hope also have some exciting things to announce next week so be sure to tune in!


We are still hoping to get a tire sponsor so we can do some more testing.  Dad is meeting with some people at Sport clips and we still waiting to hear from some others.  I still need an anchor sponsor to finish out the year.  Have a great week!  Sloan and crew!!  Follow me at http://www.facebook.com/home.php?ref=home#!/pages/Sloan-Henderson-Motorsports/122508936584?ref=ts   and sloan-henderson on twitter for race day updates