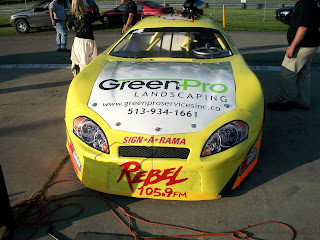 The weather was perfect Friday night. I was so excited about getting out on the track after so many rain cancelations. It was demolition trailer race night at Kil-Kare so there would be no heat race. We would only be qualifying and then the feature race. I was really happy with the Rebel 105.9 NASCAR Whelen Koehlke GreenPro #4. I went out and got fast time again! Kil-Kare inversion was a 7 so I started on the inside of the 4th row just behind Gary Estes in the Bond Machine Weiler Welding car. I was going to have to try to get to the outside row as soon as possible hopefully between the Oakley asphalt car and the Estes oil car if I had a chance to get to the front. This was going to be tough with no mirror or radios.

We did our two warm-up laps in the Rebel 105.9 Late Model and I thought something was wrong with my car. The green flag dropped and my rear end was hopping. My rear axle cap broke. In order to explain that in a little more in detail, the engine spins on a drive shaft through a Bert clutchless transmission. It then goes to the rear end where the spinning action is split between the two axles by a ring and pinion gears. Next, the 600 plus hp is delivered to the hubs by the axle. The point where the power is transferred to the hubs is where the axle caps is located. The axle caps are a small piece on aluminum that would fit in to your hand and weight around one pound. We check these regularly but stuff happens. I was done for the night. I was not a happy but those things happen in racing. My crew does a great job each week and it’s very frustrating for them and me when equipment fails. We were also grateful it was not as more expensive problem.

I would like to thank Classic Style Barber Service and Chips and Clips Lawn Services for becoming one of my new sponsors this week. Hunter Water Conditioning and Cox’s Service Station and Repair are considering being a local supporter. We are also still working with some local Chevy dealers and hope to fill our short fall in the co- anchor partnerships for this season. We are truly blessed by Green Pro Landscaping, Koehlke Components, The Rebel 105.9, Dempster Tire in Middletown, Estes Oil, First Command Financial, Line-X on Conover Drive, Miracle Welding, Shannon McGuire at Salon 122 in Hunter, Springboro Hardware, Larry and the crew at National Coating Systems Inc on Shotwell Drive, and Dayton Christian Schools. I have to also thank Miller printing and all of you for buying the paper. Dad gets so stressed out about the other sponsor we need but I know God will provide just like in the past.

Saturday, I got up and checked the weather. It looked like it was going to stop raining at Columbus long enough to sign in. We talked to Gary and headed to the Motorcar Shop in Spring Valley. We then got the call that Columbus was cancelled due to the pending rain. If I could make money on betting on the weather, I would be betting on rain on Friday and Saturday! Nothing can take away the bummed out mood like a pizza so I called Mom and Chase. We met at Pisenello’s for a great pizza. We got to meet some fans that were eating there. I would rather be racing but it ended up being a great. Sloan and Crew