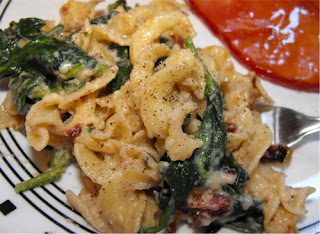 As a mother of 4, I know how hard it can be to get your kids to eat a balanced diet. Right now, my youngest will only eat corn dogs, peanut butter and jelly sandwiches, bacon, chicken nuggets and fruit. It is a daily battle to get him to try new foods. Some days I win, but most days he does. Luckily, I came across a recipe for a side dish that includes all 4 food groups. After a few trial runs and some tweaking, I can proudly say my pickiest eater is finally spreading his wings and eating spinach. But I will never tell him that! He likes it for the bacon and the cheese, what he doesn't know won't hurt me.

CREAMY SPINACH NOODLES
Ingredients
Directions
Cook the noodles according to the directions on the package. When done, drain and pour into a serving bowl. While the noodles are cooking, cook bacon and onion together until the bacon is crisp. Remove with a slotted spoon and allow bacon to cool before crumbling. Add flour, salt and pepper to the grease in the frying pan, stirring until well blended. Slowly add milk. Bring mixture to a boil and cook until thickened, stirring frequently. Add spinach and cook the mixture until the leaves begin to wilt. Pour the milk mixture over top of the cooked egg noodles and add the cheese, stirring to coat. Sprinkle with bacon mixture just prior to serving.

Posted by The Voice of Springboro at 9:36 PM