Sloan out and running... 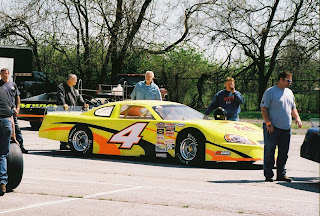 The NASCAR Whelen Koehlke/GreenPro Landscaping crew and I had a lot of work to do this week after the accident last week.  I was at the almost everyday and parts was coming in Bond Machine Shop is such wonderful supporter.  They allow most of my parts to be delivered to their shop which is a big help, so Gary call get them to the shop. We work hard and had the car ready for  Friday race but  Kil-Kare race was rained out.  I was so disappointed!  This was the second cancellation in a row.  We had arranged for several potential sponsors to come and watch the race.  The one potential sponsor is considering the truck series and is only in town every few months.  It was a much needed opportunity to get him to the track but rain stopped it.  We will regroup and have him to the track sometime this summer.
We had a few safety parts for my seat that had not come in yet and they arrived Saturday morning so we left early for the shop.  Gary and Dick had already been working on the changes to the car.   They had already been working since 900 a.m.  We got the car ready.   Dad put in the shoulder pads on my seat as required by track rules at Columbus so we could race.  We finish scaling the car and set the sway bar then we headed for Columbus. 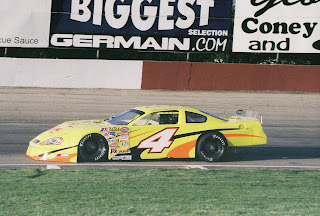 We had a rough start in the first practice( track conditions).  By the third practice, Gary got the car rolling through the corner well.   We qualified 6th out of 17.  Columbus inverts the field.  Therefore, Columbus has the pole sitter pick the number to invert the field.  I started in the 7th position.  All we had to do was top the Rebel 105.9 Green Pro Landscaping with racing fuel from Estes Oil in Franklin. Estes Oil is also wonderful by supplying all my racing fuel.   They sell it by the gallon or by the drum so tell them I sent you.
The 14 car chose to go to the tail so I started in 6th in turn one just like last week.   There was another big spin out but I was ready.  I slowed down hard then went on the high side to drive around it. The second restart, I started in 5th.   Thank God, because it was the line that moved.  I was able to move up to the 3rd position in just a few laps.  I decided to just sit back and wait because I knew my opportunity would come later in the race.  About lap 25 I was able to pass the second place car and set sail for the win.  Unfortunately, the 1st place car was almost a lap ahead of me.  I started to try and catch him but I realized I would most likely run out of time.    I chose to not push it and save my tires for next week.  You can just get one new tire a week.  The tire management is big in NASCAR Whelen Late models.  I finished a strong second pulling away from the third place car by a margin of about half a track.   With our second place finish, the crew had helped me make Ohio NASCAR history because a female has never made it in to the top five at Columbus much less a second place.   This make 2 podium finishes in three races  What a Crew!!!!
As always this week, I did my radio interview with the Rebel 105.9 on Tuesday after school around 2:45 so tune in.   You can also hear the Sprint cup race on the Rebel now….  I am still doing the community service/play “why wait”.   I worked on my car two nights.   Hopefully, I will be doing an autograph session on Wednesday nights Kil-Kare and Sonic drive in  soon if we can get it worked out.
Thanks Sloan and the Crew.
Thanks, Steve
Sloan Henderson Motorsports, LLC
"Today Is Tomorrow's History"
www.sloanhenderson.com
Phil 4:13
937-533-6271
Posted by Dominic Gross at 5:51 PM