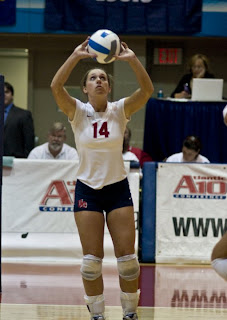 The plane crash yesterday at Wright Brothers Airport off of 741 in Miamisburg/Springboro took the lives of Tom and Kacie Hausfeld.  Tom, a successful businessmen and Kacie, a star volleyball player.  Kacie was a setter for the University of Dayton Flyers women's volleyball team.  She was on the two state championship teams from Alter, as well.

According to reports, the plane was circling back to the runaway when it was reported that there was some mechanical failure.  Some reports claim that their was a cargo door that was open and when trying to re-land the plane the wing clipped the ground, rolled and exploded on the south runway of the airport.

The Hausfelds were on their way to Chicago for an Easter trip.

A Facebook group has been set up in Memorial of Kacie by someone from the University of Dayton.  You can join and leave comments, prayers, and words to the family.  To join simply click here.

Posted by The Voice of Springboro at 6:53 AM