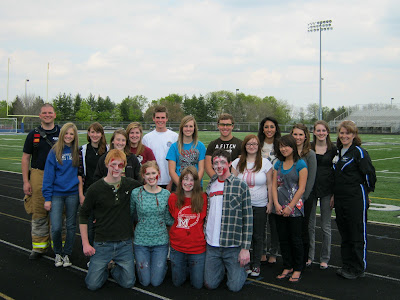 Today, April 22, 2010 the Junior and Senior class of Sprinboro High School experienced the Mock Crash Scene.  The Mock Crash set up only happens every other year at Springboro but the impact hopefully lasts a lifetime.

Principal Malone started things off turning the scene over to Angi Gooslin and the students of S.A.D.D (Students Against Drunk Driving).  Gooslin is the CareFlight Educator who narrated the entire program.  She is also a registered RN and EMT.

The Mock Crash started off with students running around two wrecked cars and calling 911.  After the call was made, the array of emergency vehicles began rolling in.  One of the first to the scene was police officer, Sargent Don Wilson of the Springboro Police Department, who assisted with student Brian Upton.  Upton was seen walking around his car holding his head and looking distraught.  Upton taken to the side by the Officer and given a sobriety test.  Upton's character was arrested for drunk driving and was placed in the back of the officer's vehicle.

Other emergency rescue vehicles showed up and began to assist the students injured at the scene.  Lieutenant Chris Vecchi of Clearcreek Township led and coordinated the team of emergency workers during the Mock Crash. Two students, Amanda Koslow and Kate Carlson characters were removed from the two vehicles by the "Jaws of Life".  Carlson was removed and taken to a secure location where the CareFlight Helicopter landed.  Koslow was removed and taken to one of the ambulance's on site.  One realization that students hopefully grasped from the Mock Crash was that these type of accidents can be not only harmful but fatal.  One student, Spencer Jonas, was seen through the whole Mock Crash sprawled out on the hood of the car.  Spencer's character was found deceased and eventually removed at the end by members of Anderson Funeral Home.

The Mock Crash scene lasted about 55 minutes.  The students saw first hand what an accident would look like if it were to occur.  They also saw vivid visualizations of what could happen if making wrong decisions while behind the wheel of a vehicle.  The impact that it can leave on their lives and the lives of others.

The Mock Crash was a great method of reaching the Juniors and Seniors just before Prom season.  But the most emotional and long lasting point was at the end of the Mock Crash.  Cher Clark, mother of a Wayne HS student, Shane, spoke about a night that she will never forget.  Clark spoke to the students in a frank but touching way discussing how she lost her son in an accident that involved drinking and driving.  Her son, Shane, was only 17.  Clark discussed the overall ramifications of driving while drinking but also texting, talking on cell phones, or not paying attention for just one second.

The Juniors and Seniors of Springboro High School took in a lot and heard a lot in just under an hour.  Hopefully, each and every student understands the potential of an accident like this if making wrong decisions while driving.  The S.A.D.D. students and instructor, Mary McConnell did an excellent job.  They should be commended for the hard work and effort it took to make the Mock Crash the impact that it was.

Posted by The Voice of Springboro at 10:37 PM