One Out of Many

One Out of Many 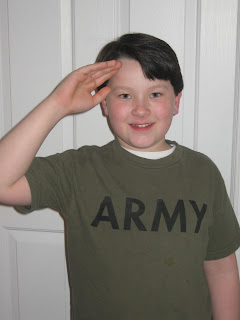 By Jan Beedle
When I think of so many youthful offenders and our country’s not-so-good soldier leaders in the media so much lately, it sickens my outlook of tomorrow’s leaders. Last week, I opened my newspaper and staring at me was another headline with a local Air Force Base leader abusing his position to take advantage of others. Rhetoric is not needed to enhance the story, but instead a simple true story I heard a few days later to restore my faith in the decency of humanity and to counteract the negative.
With permission of the writer, Sherry Wills, minister’s wife, Athletics Director at Sycamore Glen in Miamisburg and a resident of Franklin, I will relay the well-written message to you below. Sherry titled it A Soldier Story for Sycamore Glen’s newsletter to the residents:
“A few of our residents asked if I would share this short story with each of you in the messenger this month. It is a sweet story and one that I will remember always.
Last week, while my family was enjoying dinner out on a Saturday afternoon, we were blessed to witness a very touching reunion. We were just being served when in walked a young man who was dressed in his camouflage and boots. He had his badges neatly pinned to his shirt and looked a bit tired and happy all at the same time. A woman, who we soon learned was his wife, was accompanying him and had a look of a brand new bride on her face. She was glowing from head to toe and no one would have been able to erase her smile no matter how hard they tried. She was hugging and kissing him as if she hadn’t seen him in years. Then a short time later, a woman who appeared to be his mother walked in. She immediately wrapped her arms around the young soldier’s neck, crying and kissing him as she tried to mutter the words, ‘Oh, thank God! Thank God!’ It was difficult not to watch all this. After all, it was happening in a public place.
My nine-year-old son, Brennon, was taken by the soldier the moment he saw him. It just so happened that he had on his shirt with the word, ARMY, written across the chest and his camouflage jacket over it. After a short while, Brennon asked me to take him to the rest room. I knew he was really looking for an opportunity to get a little closer to the young soldier. As we were returning to our seat, I watched as my son stopped at the soldier’s table. He turned, their eyes locked, and without saying one word, Brennon saluted him.
The soldier and his family were so touched by Brennon’s offering of thanks that it brought tears to their eyes and a thank you from all who were present. I smiled at my son, letting him know that what he had just done was honorable. After we finished our dinner, Brennon asked if he could have the soldier’s signature on one of the placemats at the table. I told him it would be fine but to only ask for his first name. He then asked, ‘Mommy, would you do it? I’m too embarrassed.’ I waited until my husband and children were out of sight and approached the young man’s table. I said, ‘Excuse me, but my family would like to thank you for all that you do, and my son would like to know if he could have your first name signed on this piece of paper?’ The soldier’s mother was so proud and beside herself that she was beaming from ear to ear and kept repeating the words, ‘How wonderful. How wonderful.’
The soldier said that he would have loved to talk to Brennon but understood about his shyness. I learned that he had returned that very day from Afghanistan and that this was his first meal at home. He was thrilled that a little boy wanted his signature and wrote on a small piece of paper, To Brennon, Best of Luck Always. Sincerely, Sergeant Marshall. He added the date he left and the return date, which was that very day. I thanked him again and went out to see my eager little boy who was waiting in the car.
After telling them the story and showing Brennon his signature, Brennon began to cry and said, ‘Mommy, he could have died over there.’
I answered him by saying, ‘Yes, he could have and there are many of them who have died.’
Brennon said, ‘I never want to forget.’ He asked if I would place the signature in a frame for him, which is exactly what I plan to do.
In closing, Brennon’s response to this soldier just returning home made me think of all who have served and are serving, and made me think of our residents here at Sycamore Glen who are veterans. I wish we could honor all of you in the same manner that my son honored Sergeant Marshall. With, that being said, I think I can speak for all the staff at Sycamore Glen when I say that even though it isn’t Veterans Day, we would like to recognize you and say a sincere thank you. We salute you each and everyone.’
God Bless, Sherry Wills 3/3/10
May we never forget the sacrifices of our caring armed forces, because now and then we need a simple reminder that there are good young people coming up to lead our country down the right pathway. That, folks, is what this story is all about. Thanks, Brennon; thanks, Mom and Dad; and thanks to all the Sergeant Marshalls out there.