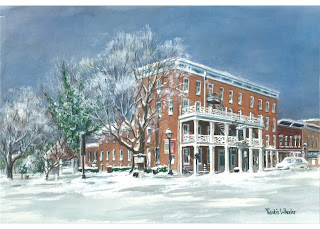 Columbus – State Representative Pete Beck (R-Mason) announced today that he has chosen artist Frankie Wheeler’s “A Winter’s Sunday in Lebanon” for his first annual holiday card contest. Wheeler’s watercolor rendition of the Golden Lamb in Lebanon will hang in Beck’s office at the state capitol.
“The 67th House District has many beautiful qualities, and the very talented artists in this contest did an amazing job of portraying them,” Beck said. “Ms. Wheeler’s painting will make a great greeting card and an excellent addition to my office decorations.”
Representative Beck and the Mason Area Arts Council teamed up to create a contest for his first holiday card to be sent as state representative of the 67th House District. Artists were asked to submit work that they felt embodied the county.
Wheeler, originally from Charleston, WV, moved to Mason in January of 2009. Since then, she has become a member of the Mason Area Arts Council’s painting group, the Mason Area Painters. Eighty-seven-year-old Wheeler says she’s been painting all her life and can’t remember a time when a paint brush wasn’t in her hand.
“My family and my art have made up my life all of these 87 years,” Wheeler said.
Wheeler won $500 for her first prize award. Second place went to Jody Ball’s “Finding the Perfect Tree” and 3rd place was awarded to Maury Mountain’s “The Batche Building.” Beck also awarded honorable mention to two Mason students, Raga Maddela and Brooke Woods.
The original Golden Lamb was built in 1803. The brick building where the Golden Lamb moved to and currently resides was built in 1815. The Golden Lamb is recognized as the oldest continuously operating business in the state of Ohio. Many prominent citizens have stayed at the Golden Lamb, including visits by 12 presidents.
For more information about the Mason Area Arts Council visit www.masonarts.org or contact Executive Director Meredith Raffel at 513-573-0007.