Home » »Unlabelled » Allegiance to the Red, White, and Blue

Allegiance to the Red, White, and Blue 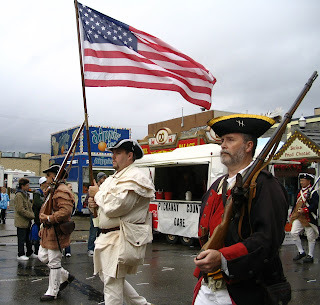 “Allegiance to the Red, White, and Blue”
By Jan Beedle

What does our patriotic duty have to do with anything? The signs are still in my mind…with red, white, and blue as predominant colors.  Every overheard conversation is about who should have won the 2008 elections…Obama’s or McCain’s qualifications or disqualifications. Too late now. Lyn Larouche or Ralph Nader never gave up the fight for recognition, leadership.
I had been hooked on the popular TV show, “West Wing,” since its inception, and saw parallels between our government’s day-to-day dealings with world situations and Jed Bartlett’s fictitious, but thought-provoking staff. The last two sequences concerning a Mid-East conflict were surreal. I’m surprised that Daytonian Martin Sheen (Estevez) has not thrown his hat into the political arena, along with others from Hollywood, such as Arnold S., Senator Fred Thompson (“Law & Order”), and the retired Wrestler/Governor J. Ventura of Minnesota. After all, it takes a certain amount of moxy, fame, and a lot of acting to pull off a high-ranking political position these days. Let’s face it…money talks an even bigger talk.
Each president slides into the role exhausted from the round of speaking engagements and constant mouth movement by making promises he intends to keep, but can’t realistically. How is it physically and mentally possible? At the beginning, he still has a youthful appearance, but after the first term of a fast-paced, tumultuous battle, he has squinty baggy eyes, white hair, a raspy spent voice, and permanent worry lines. The gray is already showing. It has to be a thankless job to top all jobs. I only hear complaints…no praise.
I personally have experienced leading groups, and it’s never easy, if you want to make changes or accomplish anything. There is always a negative factor. Usually, the naysayers want change, but aren’t willing to help establish or maintain the changes wanted.
Election Day 2009 will soon be part of the past, and we will have to deal with the future of living with the decisions we have made. The issues you voted for will be initiated, or not. Too late, the fields are plowed and torn up. It will be time to plant the seeds, nurture them, and pray fervently for a fruitful crop.
I quizzed an 18-year-old young man about political parties and what they stood for; I was surprised by how much he knew. He saw the Green Party as hippies wanting to spread peace, love, ecological balance, and as working to save natural resources. The young man viewed the Constitution Party as extremist religious practitioners. The party is based upon the belief that the original Constitution was based on God and country and we should adhere to its basic concepts…with no change. From his knowledge of the Libertarian Party, the members want to eliminate the IRS (I wish, but realistically…), FDA, and other government organizations.
A 20 year-old young man, who recently returned from Iraq, says the job situation is crucial for his age group. Training that is more specific, benefits, and skilled jobs need to stay here on our soil.
The most memorable interview was with Walter H. Moses of Bellbrook, Ohio. He retired after 22 years from the DESI Security Force. Mr. Moses was from a big family out of Williamsburg, Kentucky. Four of the males died young due to “wine, whiskey, moonshine, dope, and wild livin’, but green grass still grew on the graves.” He said, “honeysuckle will grow on his.”  Mr. Moses was drafted in 1944 and considered it a privilege to serve his country in WWII.  By 1945, he was an MP in Korea. His blind grandmother used to sit on the front porch of her home and pray every day for five boys.  They all came home alive. Mr. Moses said, “Bush was a good honorable man. People didn’t like him because he tried to be the fire chief of the world. Doesn’t work.” He said to refer to Jeremiah 50, 51, and 52 to see why we’re in Baghdad, and to look in Genesis to see why the United States of America is Israel’s friend. Walter Moses had a disabling stroke on January 20, 1995, but ended up walking out of the hospital. He has seen miracles, and believed the 2008 election was a miracle.
Wow…with these convictions of the young and old merging, How could I not look forward to my patriotic duty as precinct presiding judge?  Of course, it has taken me at least a year to recuperate from the last wild Election Day. The General Election should be calmer, but in Ohio, I am not sure.